“Automobile Alley” in downtown Oklahoma City is a historically significant area of the city.  The street, Broadway is the major north/south street with a rich history originally designed to allow a horse drawn freight wagon space to turn around.  The early car dealerships were located here as well, thus its modern name, Automobile Alley. OKC’s downtown area has been undergoing steady revitalization beginning in the early 90’s when taxpayers elected to increase the city sales tax to make improvements under the plan call MAPS.

Moon Decorative’s owner, Doug Bannister worked with Cook Engineering on the specifications to redo the paving on Broadway.  The paving was part of the Automobile Alley Main Street Program, partially funded by MAPS and part with a federal grant tied to the Murrah National Park funding.  Renowned Oklahoma City architect, Rand Elliot, designed the Broadway intersections. Connelly Paving, a longtime OKC concrete company, was the general contractor and Professional Concrete Services acted as the decorative subcontractor.  Dolese Brothers was the concrete supplier and selected because of their stellar quality control and service.  There were several factors that made this project very special. The following pictures and text tell the story. 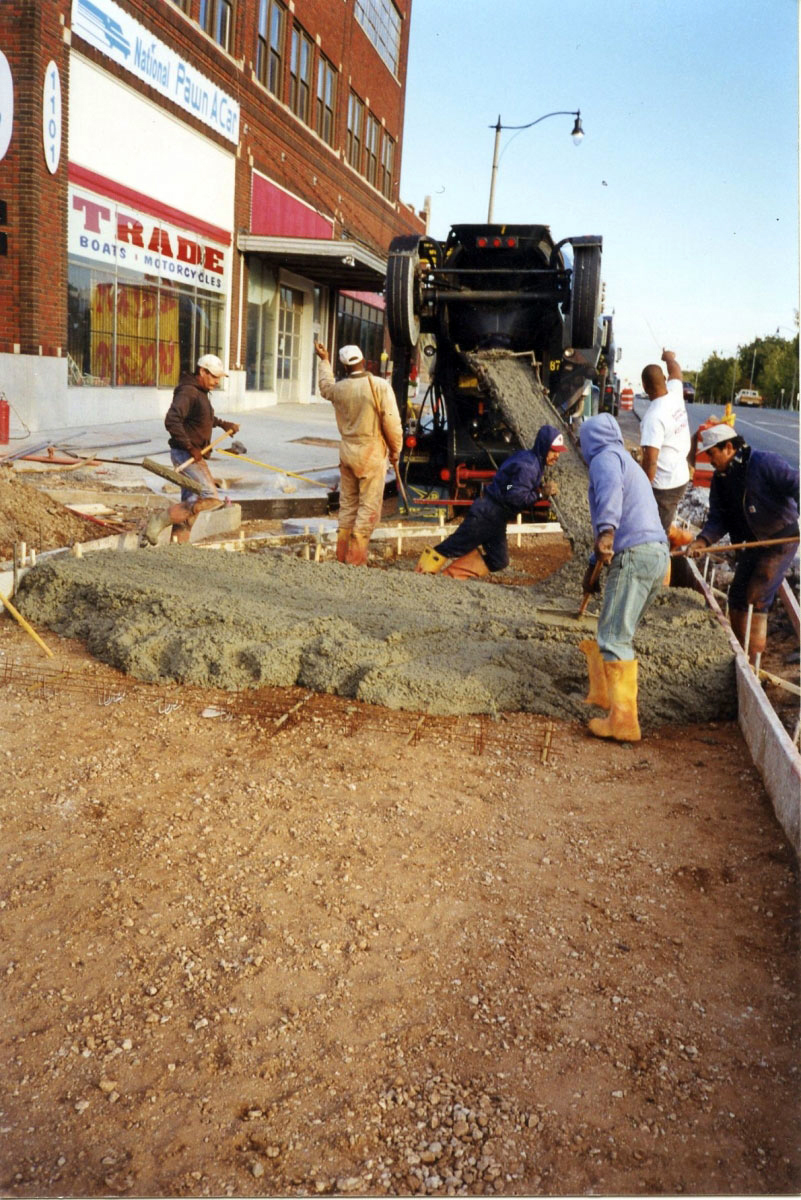 The concrete was all fiber reinforced, air entrained, 3500 psi. Gray fly ash concrete placed at 10″-12″ thickness, and some areas of 3500 psi Portland cement that was integrally colored. All of the 56,000 sq ft was placed at a three inch slump. 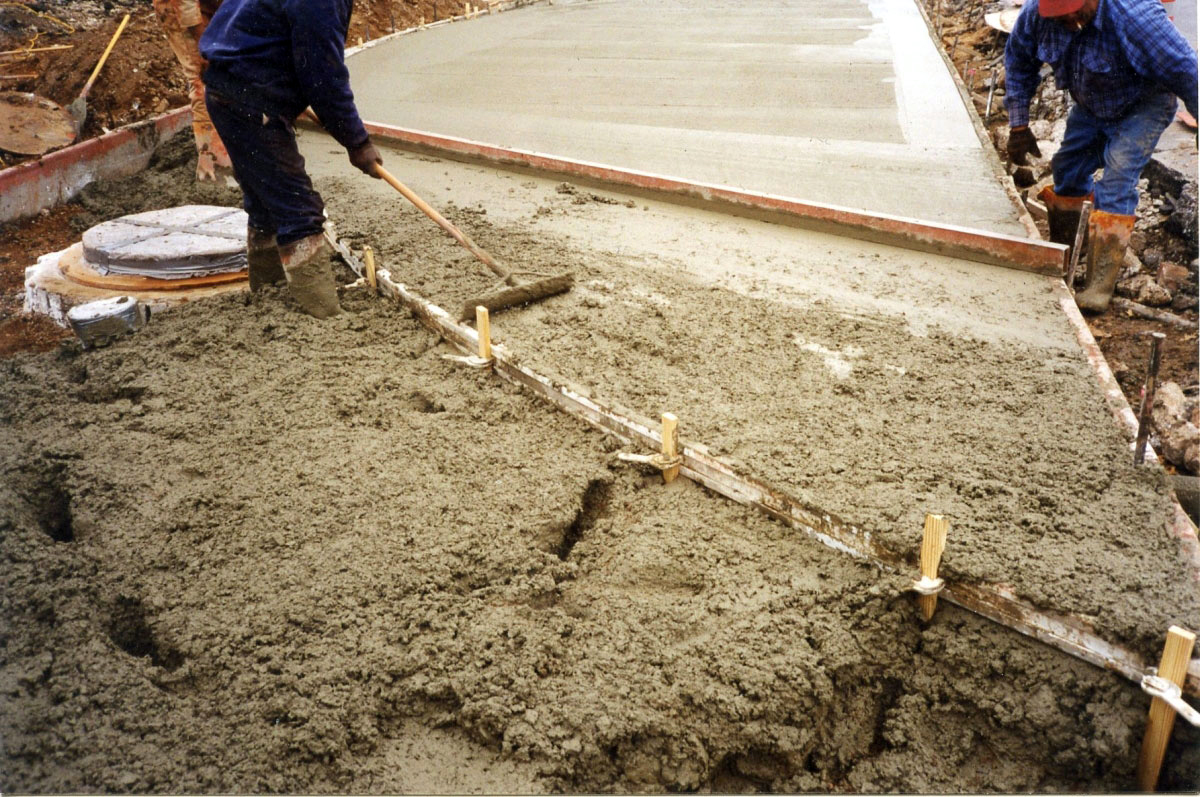 The gray fly ash mix was placed up to the bottom of the Plastiform on the near side and all the way to final grade on the other. The step down was topped with a Portland 3500 mix colored with 20 lbs/CY of Integral Color. The faster setting Portland mix allowed the stamping to take place across both surfaces: gray and red. 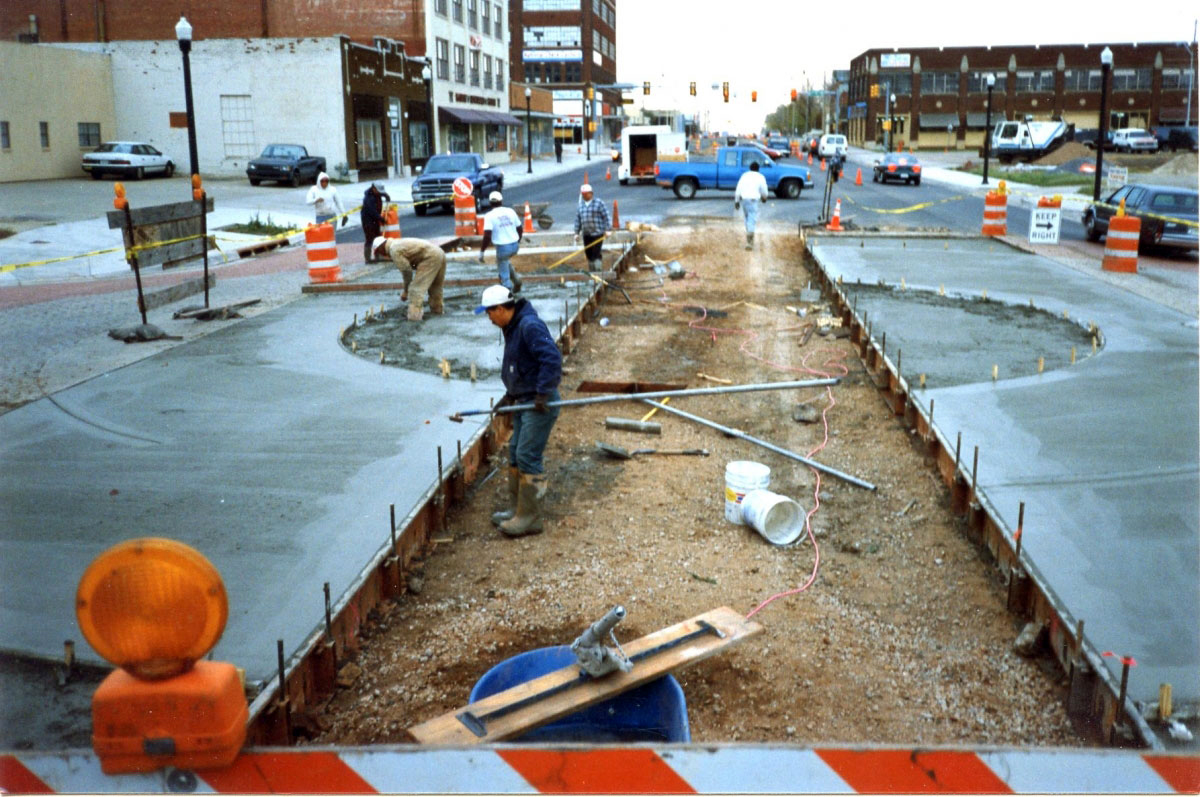 Notice the wood bull float in the foreground. I experimented with the use of wood to determine the effectiveness of reducing edge cracking. The deep joints on the stamping tool would demand that the surface of the concrete stretch, ideally without crusting and cracking around the joints. The wood, tested side by side with a magnesium bull float, proved that edge cracking was reduced. All 56,000 sq ft of paving on this project was wood bullfloated with minimum crusting issues. 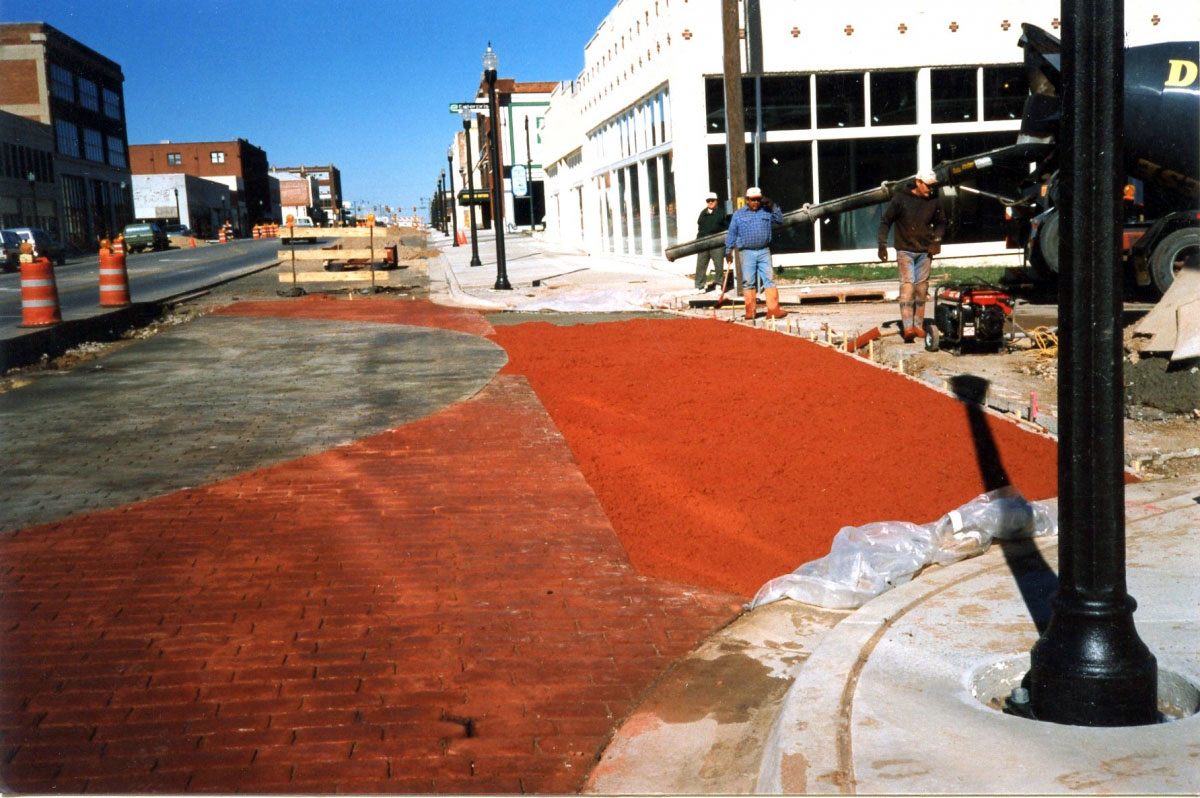 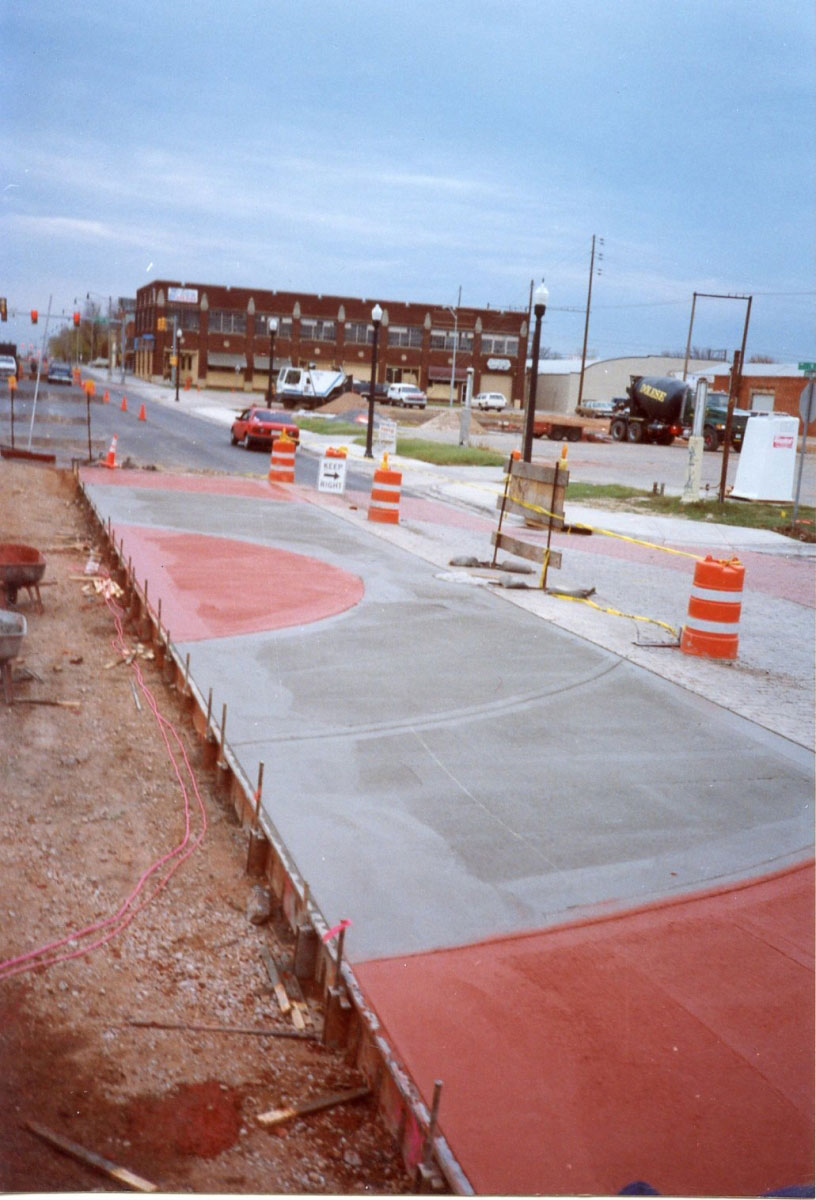 The hydration of the slower setting flyash concrete and the faster Portland, integral colored concrete coming together. 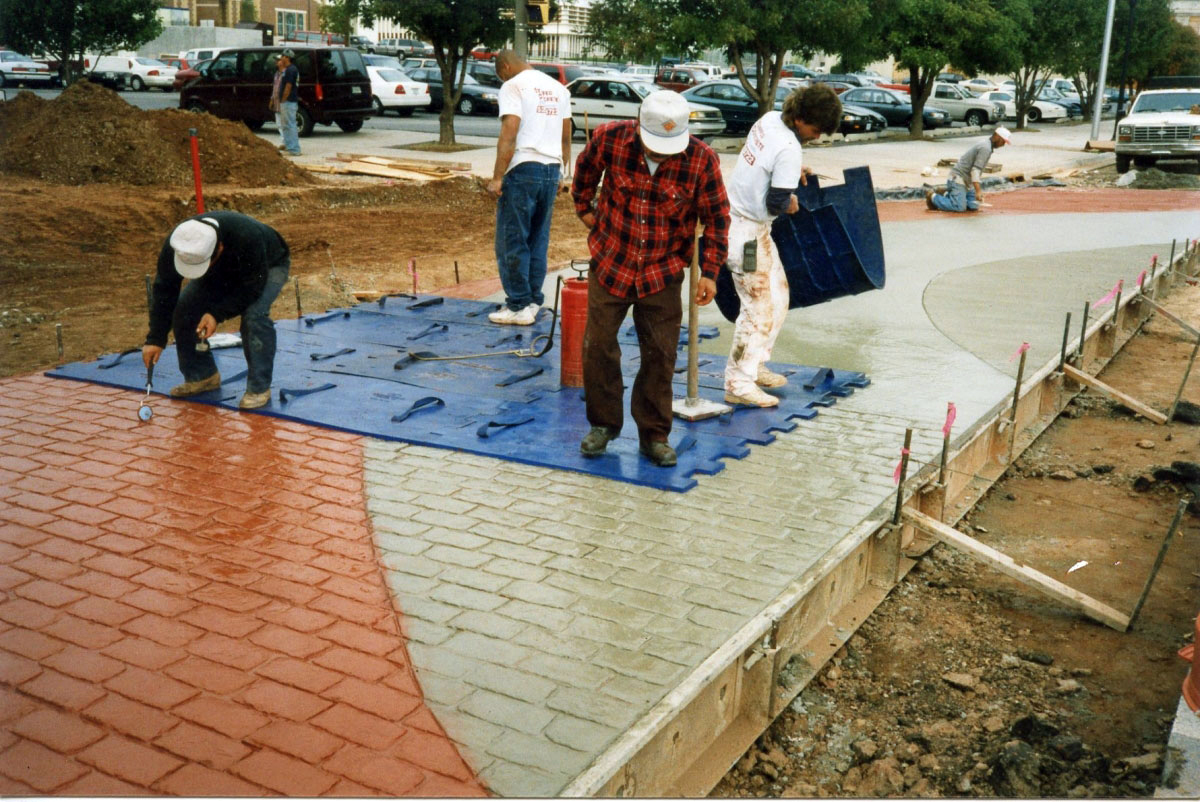 The timing of the two different concrete mix designs come together perfectly allowing the stamping to take place across both colors. 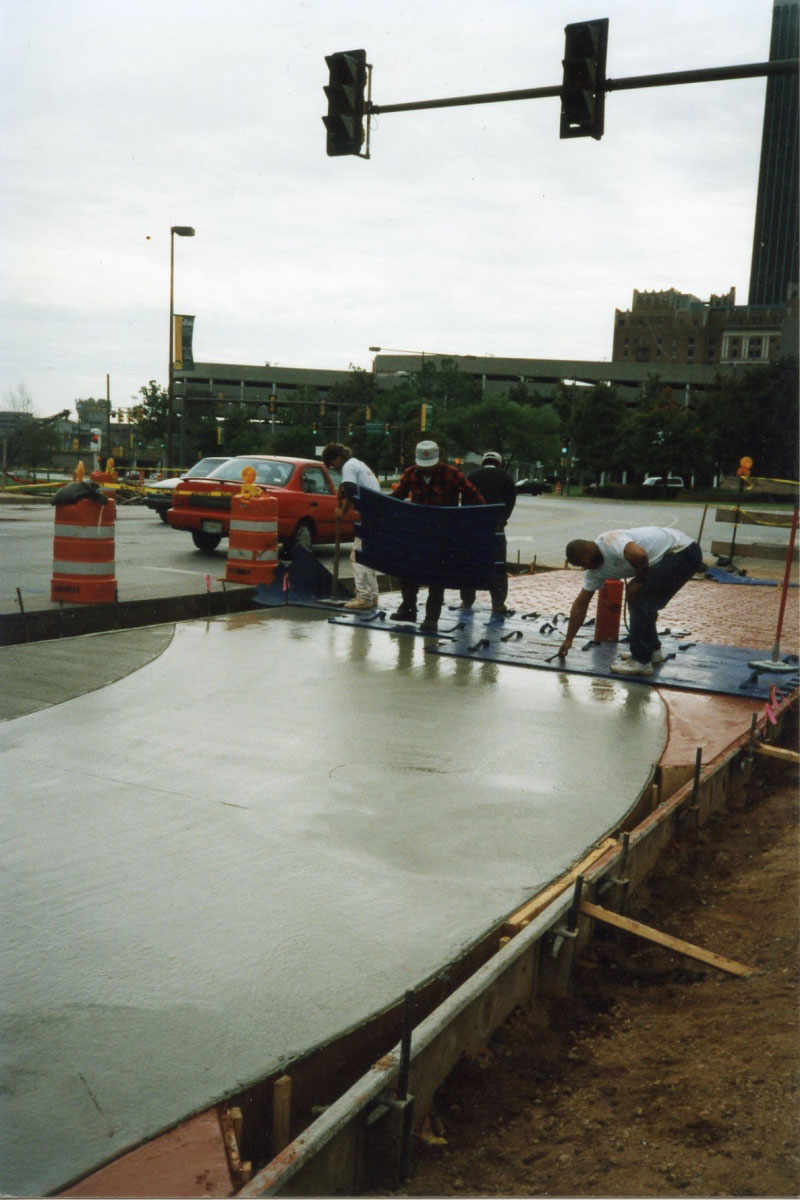 Clear Liquid Release allowed the stampers to do any remedial work that showed up. 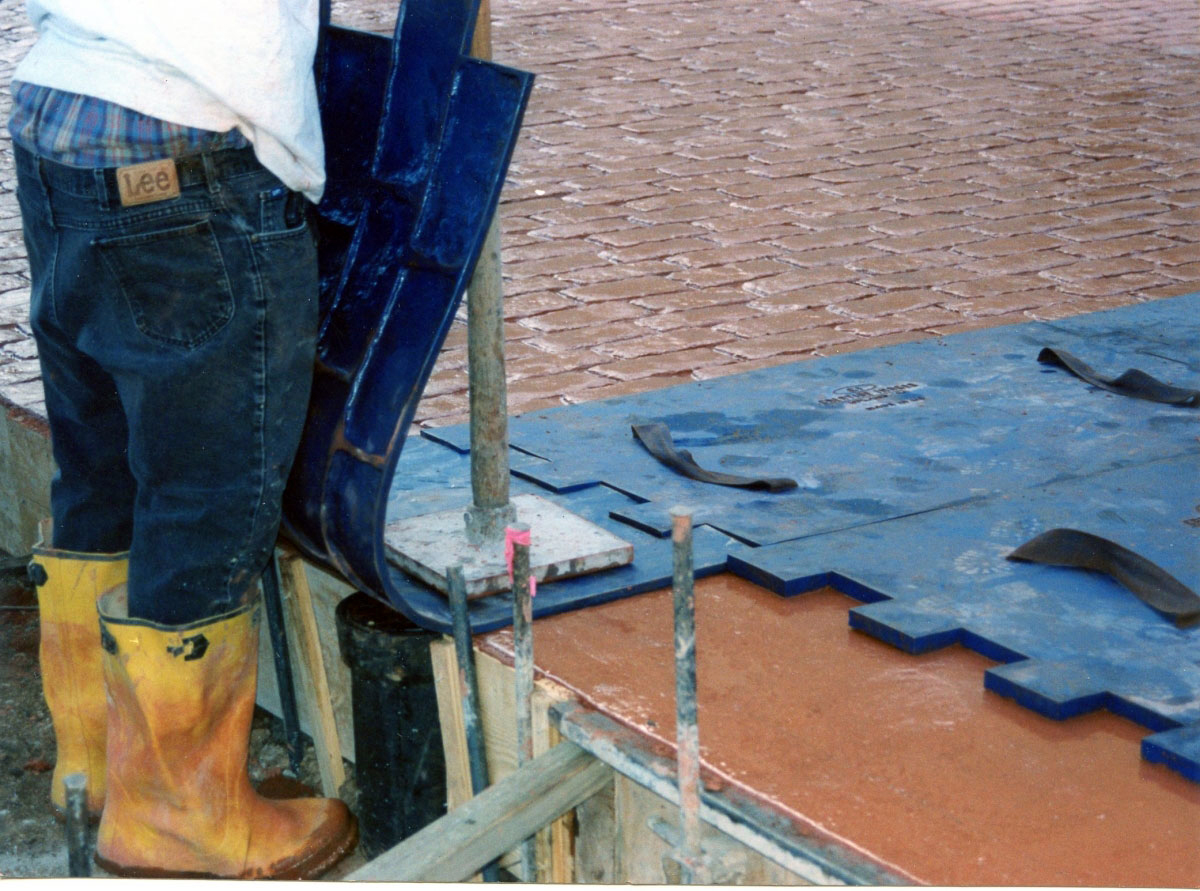 Thank goodness for Clear Liquid Release agent. It really is a lifesaver. 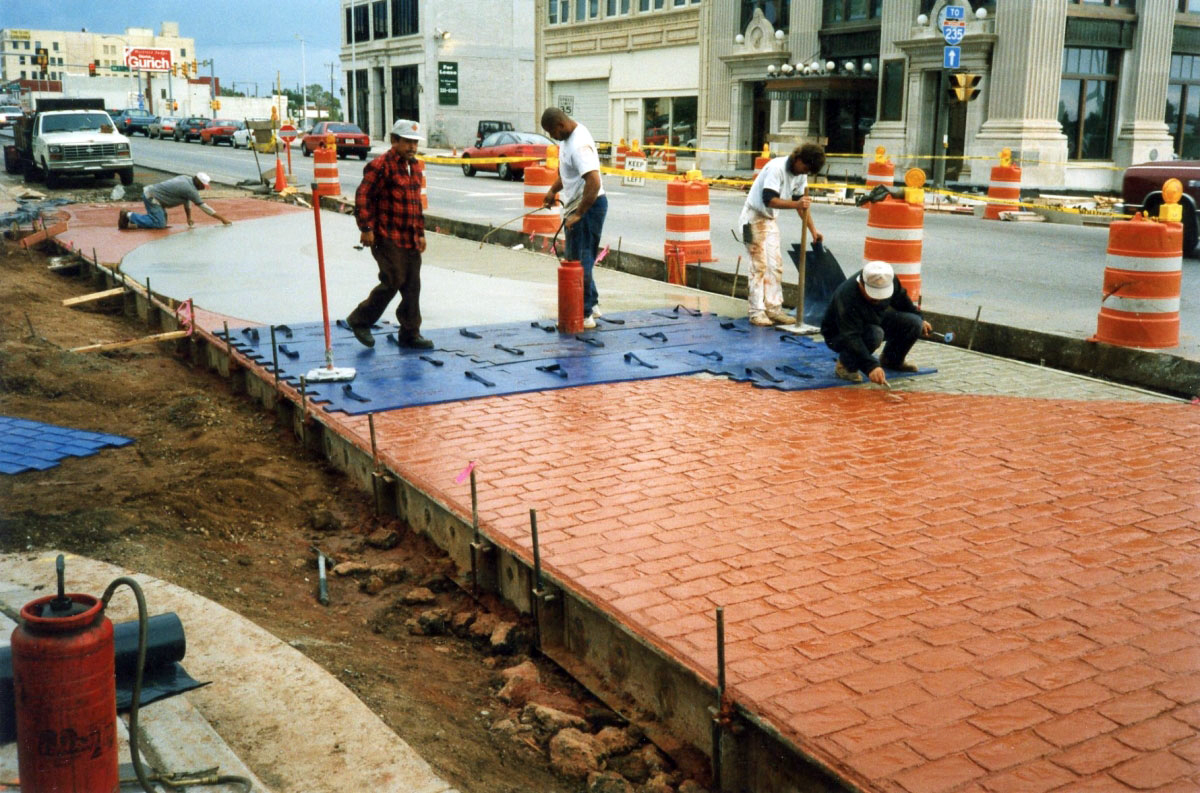 Touch up work is very simple with Clear Liquid Release. Notice the kneeling detail man on the right. 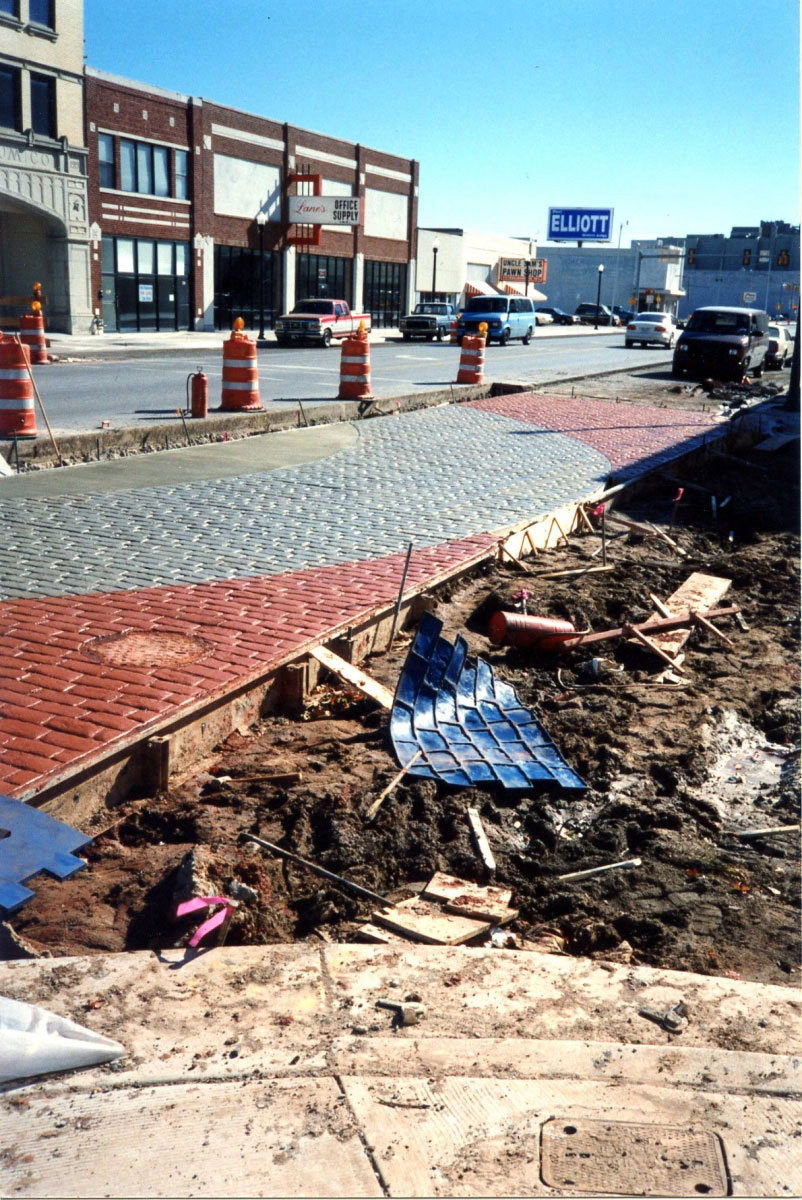 Moments after the last portion of concrete was stamped. 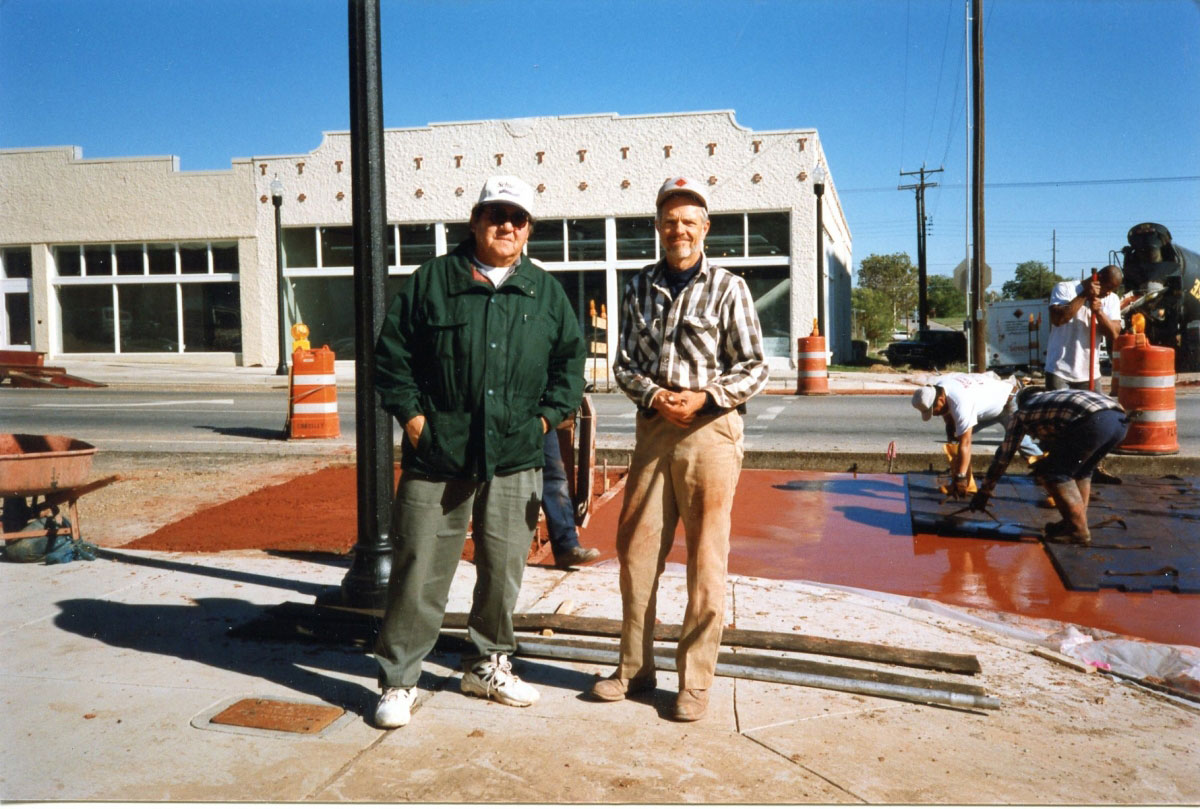 The city inspector, Tom (L), did not spend much time with us. Test cylinders were consistently breaking about 5,000 psi.  Our submittals prior to beginning the project included several Fritz-Pak products we added to the ready mix truck to help us step retard the red Portland loads in order to allow the slower setting plain gray fly ash mix catch up so we could have consistent depth imprinting of the different batches. 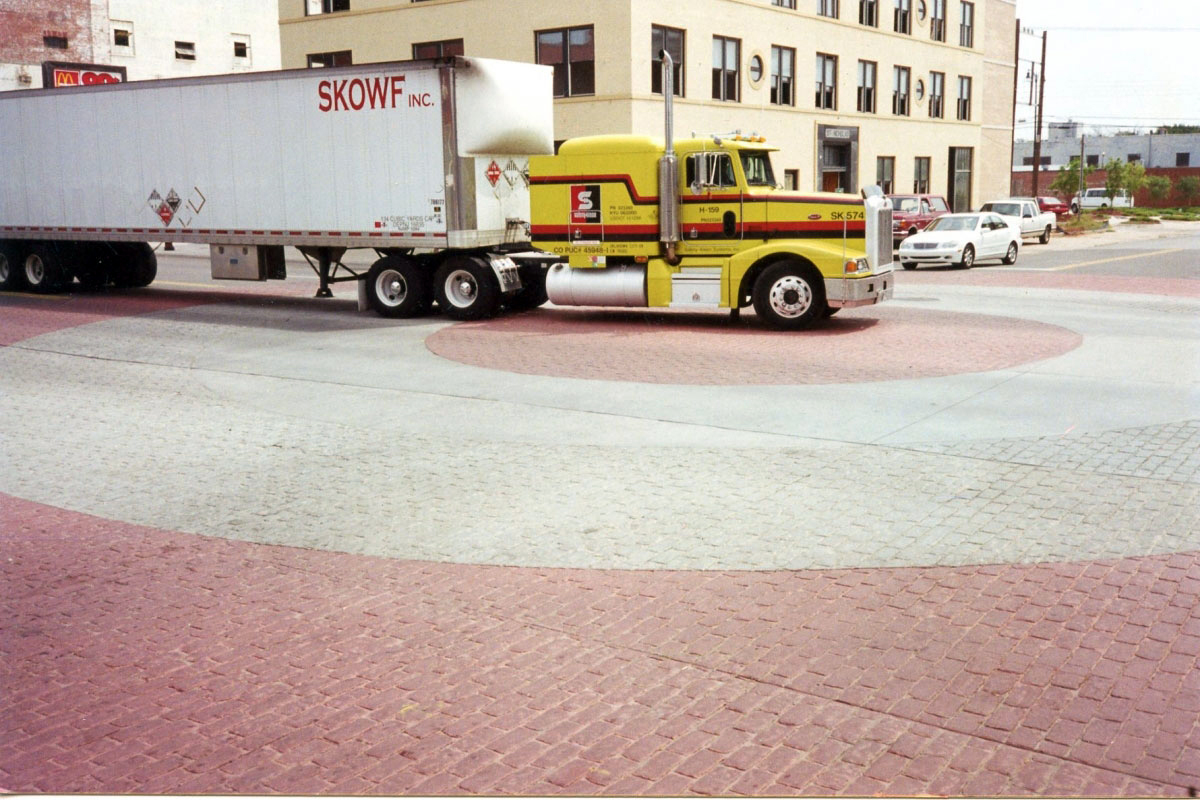 Today, the paving is fifteen years old and still functioning extremely well. Automobile Alley is now thriving with new business, coffee shops, design firms, and even a bicycle shop. The architect’s design, which can be seen in the above picture represent an automobile tire. Not only did he achieve this look, he also got the rumble of tires to be both heard and felt by those who passed over – and so it does!